The Opposition Makes Ready For The Duel 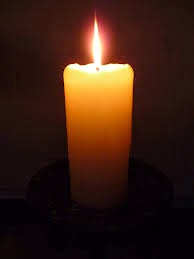 The beeswax dripped slowly down the side of the candle's cylinder, the inferior workmanship of the candle showed as the candle burned unevenly and the wick sputtered slightly, a result of imperfections in the wick that remained when the body of the candle was cast. The rivulet of wax slowly ran down
and puddled against the bottom and side of the candle, the inn keeper too cheaper or too poor to provide a candle holder for the candle. Another candle rested in a sconce near the door and there was a torch which had been placed in a holder when the group had entered the private room and it guttered and smoked, its tallow-soaked head spitted and flamed, fouling the air. The atmosphere would be unbreathable shortly if a window wasn't opened but it was cold outside in the dawn's light.

From the shadows, a bony hand reached forward and grasped the barrel, tilting the candle so its flame heated the opposite side of the barrel of the candle top and the flame loomed with its increase in fuel. The top of the candle leveled out and the glowing eyes in the shadow narrowed in a squint of approval as the candle was placed back down on the table next to the puddle that had formed. As the hand was pulled back, the ring on the third finger, a blood-red garnet set in a golden setting ring with small chips of onyx, flamed in the gleam of the light.

There were three men around the table at present. The first man was the second for the duel who was preparing the details of the engagement. He was dressed in fine clothes, a velvet green tabard, nicely crafted leather boots and carried a rapier and small sword in his waist belt. His purse was full with silver and a few small jewels and he felt capable of preparing all of the myriad details. The second had prepared for duels in the past but never such a big event before. The public was already talking about the event, vendors were already beginning to gather selling fruit and meat cakes, sugar-candies and sweet-plums and dueling dolls. There was already talk among the plungers and high-rollers of the town as to who they wanted to who they wanted to bet upon. Many of the sharps were placing their smart silver on Randal but there was a growing trend in some of the more informed players shifting their silver and in some cases, even gold, over onto the blade of the Red Ghost, who ever that was. Maybe he should do a little research prior to the duel? He was a partner of Randal and respected him. A little, maybe. But just in case maybe he should shift a bet or two.

The next man was Randal. Dressed for the duel in a flowing linen shirt, he wore knee-high boots with a low heel and carried a low-cost saber across his lap, resting upon the leather jacket and cap he had removed for the meeting. He slowly stroked the edge of the saber with a lap-stone but this saber was not the one that would be carried for the duel. Those were being delivered by special courier who was riding in from Kirkenhold from the forges of Ovir Garbig of the Bear Clan, a master Dwarven sword smith. 600 silver had been put up for the blades and another 50 for the rider to deliver them and he hadn't seen them yet but they should be here before noon, he hoped. The time of duel had not been set but noon was traditional for a public duel.

“What is known of this Red Ghost adventurer?” Randal scoffed. “What is known of him and his skill?” Randal tossed his lap-stone onto the table and took a big drink of the tankard of ale that sat in front of him. Foam from the tankard frothed onto his upper lip and he dragged his hand across, wiping the foam with his shirt sleeve. He flicked the drops on the back of his wrist to the floor and looked into the darkness toward the third person.

“Over-confidence can cause a lack of ability,” came a silky-smooth voice from out of the shadowy gloomy. There was a slight echo to the sound of the voice and the second and Randal looked at each other a little in fear as they tensed and Randal cleared the remaining beer from his throat.

“He does not concern me,” scoffed the belligerent. “I have been in many a duel. I shall slice the upstart into ribbons at the start and kiss El'lolu for him. He doesn't stand a chance. The odds are three to one in my favor to win.”

The shadowy figure leaned forward into the candle light and crossed his hands together, the garnet ring on his left hand picking up the candle light and flashing in an otherworldly glow that gave Randal and the second a loose feeling in their bowels. The second swallowed hard and settled back in his chair trying to move away from the figure as much as possible. The figure pulled his dark red sleeves back from his arms, his forearms bearing the cabalistic symbols of arcane tattoos, intricate patterns weaving magical legerdemain and black art. He pushed the sleeves back, freeing his forearms up to his elbows. The tattoos seemed to pulse with reflected candle light.

“Let us see what can be done,” intoned the shadowy figure with a slight chuckle, “to tilt the table in your favor.”